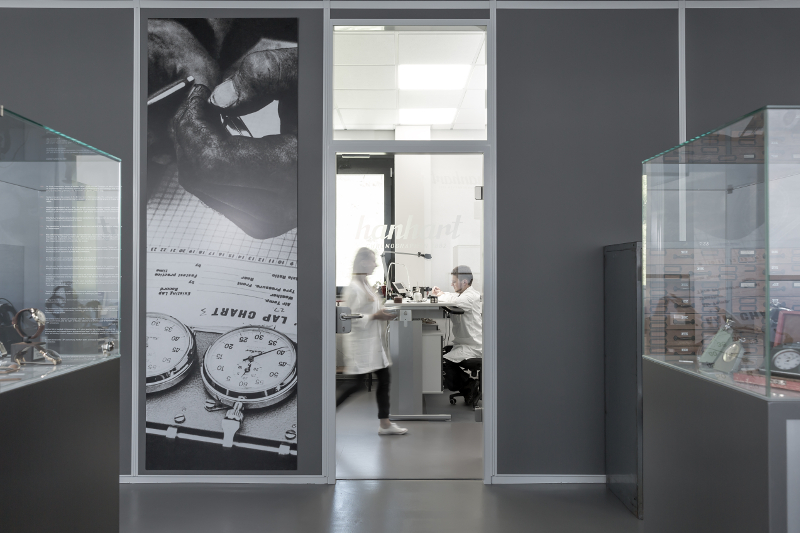 Tradition and Know-How since 1882

As a small watch shop was opened in the Swiss town of Diessenhofen in 1882, it was not known yet that Hanhart was going to be Europe’s largest producer and market leader in the field of mechanical stopwatches as well as a big player in the German watchmaking industry.

Hanhart holds, apart from a brief period after the Second World War, an uninterrupted manufacturing tradition until today. The breakthrough for the company was in 1924, when Willy Hanhart, the founder’s sports-loving son, launched the first affordable mechanical stopwatch. In 1938, the second great era followed: Hanhart is pioneer in the production of pilot’s chronographs and with the Calibre 40, the way for the development of the nowadays extremely coveted collectors’ items was paved. From the 1950s, Hanhart increasingly focused on manufacturing mechanical stopwatches and attained global reach through sports timekeeping. Hanhart stopwatches became indispensable for important car racing or sports events and general school supplies.

The company countered the so-called “quartz crisis” from the ’70s by establishing a separate plastic foundry and developing its own quartz movement, the Calibre 3305, which has been sold millions of times. Hanhart referred to its pioneering work in the late ’90s and launched the legendary pilot’s chronographs as carefully crafted new editions. Thus, the predecessors of the present Hanhart collection were born.

Highest quality standards “Made in Germany”

Only a short time ago, a new watchmaking workshop has been established in Gütenbach, where the fine Hanhart chronographs are produced. Right next to the watchmaker area, Hanhart’s unique corporate history is represented in a museum with precious exhibits and timepieces, which has been produced by the watch manufactory since its foundation.

The headquarters in Gütenbach, in the Black Forest of Germany, cover also an in-house tool and component production. The smallest gear wheels, different circuit boards and other various parts of mechanical movements are made in this department. In many manufacturing steps, the milled, punched or eroded components are assembled into modules first. In the final assembly, the watchmaker attaches all components together and sets the dials and hands. The results are high-precision watches and stopwatches with specially developed additional functions and the quality seal “Made in Germany”.

Anyone who is curious about this and the long-standing company history is welcome to visit the Hanhart Museum on every Wednesday afternoon. Take the opportunity to look over our watchmakers’ shoulders, allow yourself to be inspired by their craftsmanship and join us on a time journey.